When Caro Taylor was growing up in Derbyshire she was told that taking a law degree was out of the question because she came from working class family.

So the eager student went to Lancaster University to study English Literature instead.

But after speaking to lecturers she soon realised there were actually no barriers and she could do law after all.

So she switched courses after one year and so began her legal career.

She graduated in 1982, attended Chester College of Law and joined her first law firm in 1983.

On April 1 this year, Caro retired from the legal profession having established her own company Caro Taylor Solicitors in 2007, merging with Rawlins Davy in 2020. She has specialised in family law for most of her professional life.

She said: “I have really enjoyed my career in the profession. Lots of people have said to me over the years, it must be depressing dealing with divorces for so many years.

“But actually I always took a different view. I saw it as helping people who were in a really difficult time in their life, into a much better place and a new start. I always found that very rewarding.”

Caro began with crime and family law but then rapidly concentrated on the latter.

“I gave up criminal law because I wasn’t that thrilled about going to police station in the middle night to see clients. That didn’t work well with having a young baby,” she said. “One night a client was sick over my shoes so I think that was the final straw.”

Caro worked for several law firms over the years, gradually moving southwards before finally settling in Dorset in 1998 and becoming an equity partner in a local company.

When she set up her own practice in Poole Old Town, she and husband Jan ran it for while alongside a yacht brokerage, which they soon gave up as the new law firm quickly grew.

She added: “In my own business there was never a spare hour. It was crazy. Lots of clients came with me and new clients liked the idea of me being small and totally independent, not part of a big firm.

“I always held the highest qualifications in family law, which people found reassuring. I have really enjoyed my career in the law.”

Caro and Jan are selling up and moving to the north west where they have two children and two grandchildren. 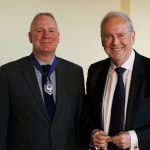