“There has been a sea change in the way disputes are resolved. Since 1999 and with very positive encouragements by the courts, settlements have become the name of the game. Long gone are the days of rushing off to court to issue a writ following a commercial or personal dispute, as such tactics may now carry huge costs penalties;” explains Martin.

He makes the point that, while every aggrieved party believes that he or she is right and the opponent simply wrong, the winners are those who accept that, principles apart, the only realistic way forward is to find common ground and achieve a satisfactory compromise.

“To the parties concerned this can be very difficult and initially an unacceptable course of action. This is where a qualified and experienced mediator can be invaluable. The optimum result is one which is not only cost effective by quick – allowing both parties to put their disputes behind them and move forward productively.”

To discuss mediation services, email Martin on martin.davies@www.rawlinsdavy.com or telephone him on 01202 558844 to arrange an exploratory appointment. 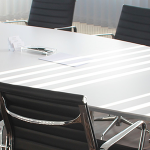 A ‘Heads up’ for Non-ExecsPublished Articles